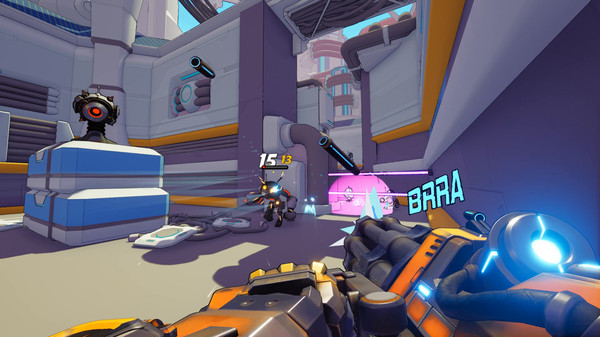 This update was a bit special for us because we won’t be able to release any fix as fast as we did for the previous updates. We will (finally!) be taking some rest and going on holidays for two weeks after the update lands so we had to make sure everything was as stable as it can be from the get go.
Once more, the playtesters have shown up and helped us tremendously in that area so a big shout out and thanks to everyone involved!

Also, we won’t be as present as usual on our related social channels but rest assured that we will be actively following and reading your feedback nonetheless (whether they’d be on Discord, on the Steam community or through the F10 ingame system).

When it comes to this Winter update, here are the highlights:

Haven-City is a gigantic, tortuous level with lots of verticality to play around with.

Several changes to the player progression mechanics with the most noticeable being leveling-up your perks!

We’ve made an optimization pass, but it’s not the last and we will obviously need more to make the game as fluid as we’d like. But for now, your CPU should no longer tank nearly as much as before and you should experience a better and more stable framerate overall (if your CPU was bottlenecking the performance, and not your GPU).

And here we go. Hope you liked these highlights. If you want to know more, check out the meaty Winter patch notes down here:

• Some translations are missing from the game, and they’ll be added over time
• As usual but not to forget, we thank Awneeon, Bandicoot, Filippo, Flo, Luciifero, Ria and Tryyton from our awesome Discord community for their translation work!

• Jetpack impulse has been modified and should allow more vertical mobility while preserving its hover potential
• Jetpack now starts regenerating automatically after not using it for a split second (it was previously waiting for you to hit the ground once)
🍉 Shield values are now based on a flat amount rather than a percentage of your maximum health
• Every trap damage has been reduced (-20% in average)
🍉 We disabled the “Mouse Smoothing” Unreal option and did not notice significant changes but we’d love your feedback about this
• Several new challenge rooms and others tweaked
• When your brobot is taken down by the enemies, he now has a red highlight and a better compass indicator to locate his wreck

• You can now level-up your perks instead of picking a new one
• The perk display has been modified to better showcase the values and their progression
• Upgrades (bonus attributes) granted every two levels have been removed from the game as a result (they weren’t needed anymore with the addition of perk level-ups)
• To follow-up with these changes, many perks have received modifications, others have been deleted and new ones have come into play

Developer’s Note: Like we said in the previous patch note regarding perks, the content is going through continuous improvements and we’re always looking at replacing what we deem the “least” exciting of it.

• New weapons have been added to the game:

Assault/Precision – Tier 1
• Automatic crossbow with the ability to scatter shot to thin out the enemy waves.
Throwing Knife

• Junk Colt and Flare Gun added to the weapon starter pool (you can find them at the start of your runs)
• New weapon affixes have been added to the game, some have been deleted

Developer’s Note: Like we said in the previous patch note regarding perks, the content is going through continuous improvements and we’re always looking at replacing what we deem the “least” exciting of it.

• Several weapons have received gunfeel and usability upgrades (no major balance changes)
• Some of the new weapon affixes “cost” 2 stars (and therefore a 3 stars weapon can end up with 2 affixes)
• Warmup times have been reduced across the board
• Firerate bonus calculation has been modified to make it more logical and allow us to crank up the values a bit more
• Heavy affix movement speed reduction decreased to 30% (down from 40%)
• You can now find Weapon Consoles in secret and other areas to print new affixes on your weapons (please note that the UI for this is placeholder)
• Graviton launcher gun feel improved: new shoot sound, added better camera shake, added onomatopoeia and added HUD shake when shooting

• New and unique enemies added in the new level, some enemies present in this level are still placeholders and will be replaced later on
• Projectile amount for shotgun-like attacks have been reduced to 3 (down from 5) and their spread pattern has been modified to make it possible to powerslide below
• Gatling Pods’ (spam-like turrets in Fields) rotation speed and firerate decreased but projectiles speed highly increased
• Dr. Turret has received several improvements to its attack patterns, he should be harder overall and his attacks more threatening, forcing you to move more often
• Dr. Turret now has its own sound set
• Diggy Mole rocket flurry attack pattern has been tweaked and should hit you a bit less randomly
• Reduced slow effect on frozen enemies but increased duration
• The hitbox detecting the boots’ bump has been improved
• Some boss attack patterns have an “extreme” knockback effect added

• Artifacts are now unlocked like other persistent rewards (you don’t have to find a blueprint to unlock them beforehand)
• As a result, “blueprints” have been removed from the game
• You now unlock the different artifacts by reaching specific Basecamp levels
• You now have access to your artifact rack in the starting area of the first level
Levels

• Haven-City is a new level available after the Energy Center

Developer’s Notes: No story has been injected into the game though. We’ll be injecting more later down the road.